Sadly, because of Covid-19, all rides posted on the website until August were cancelled.

The original Mellow Velo programme for 2020 included a Three Parks Dayride, which involved taking the new direct train from Edinburgh to Cumbernauld, then cycling back to Edinburgh, via Palacerigg Country Park, Beecraigs Country Park, and Almondell Country Park (45 miles). This was postponed owing to COVID-19 but, by August, it seemed as if the ride might be possible, even though the toilets, café, and visitor centre in Palacerigg Country Park were still closed owing to the COVID-19 restrictions. Sadly, the severe storm of 12 Aug 2020 caused a breach in the banks of the Union Canal near Polmont, which washed away the railway track below, and prevented trains from operating between Edinburgh and Falkirk.

Therefore, this now became the Two Parks Ride: no trains are involved, just a simple circuit of 41 miles from Edinburgh (measured from Haymarket), passing through Beecraigs Country Park, and over Almondell Country Park. The route is outward via Cramond Brig – Kirkliston - Faucheldean – Ochiltree - Beecraigs (17.5 miles), returning by Uphall – Camps Viaduct over Almondell Country Park – Kirklinton – Long Dalmahoy – Curriehill station – Currie – then back to Edinburgh by the NCR75 which means the Water of Leith Path and the Union Canal towpath. (23.5 miles).

Tthe weather was ideal for cycling: sunny but not too hot, with an ENE wind of 10mph to assist our ascent towards Beecraigs. Progress was so good that we did not need to make the optional stop at Winchburgh Café, but went on to the Hideaway Café at Beecraigs Country Park, where we sat outside at tables in the sun.

Heading south from here, we avoided a steep descent and ascent, by following the contours: taking the recently-improved cycle path SW to Balvormie, then a forest road SE to rejoin the vehicle road.

At the east end of Dechmont Main St, at the junction of the road from Linlithgow, we were excited to discover a piece of metal artwork which was new to all of us. It commemorates the private railway which formerly ran from Uphall to Bangour Village Hospital, and was much used during the First World War to convey soldiers wounded at the Front, to the hospital. The railway was opened in 1905 and dismantled in 1921.

Near Uphall, we paused at the steel footbridge where our north-south cycle path crosses the Brox Burn, to admire the depth of its canyon, and the size and flavour of its brambles.

We stopped again when we reached the Camps Viaduct, which crosses the part of the valley of the River Almond which forms Almondell Country Park. We admired the view, and tried to make sense of the several watercourses visible below. 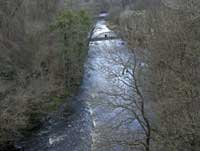 Looking upstream, in addition to the River Almond itself, we could see the intake of a channel on the NW side of the river, which looked like a ‘mill lade’. Looking downstream, we could see a bridge across the river, which I know from a previous visit to the Park, actually carries the water channel from the NW to the SE side of the river. Wikipedia confirm that this channel is in fact the Almond Feeder which is the main source of water for the Union Canal. “Due to the height difference where the river passes under the canal, this feeder must run for several miles eastwards before reaching the canal.” It has been constructed like an open canal, but includes 4 sections of masonry tunnels. But, given that the feeder is to run for several miles along the SE side of Almondell, why is the intake on the NW side, necessitating the construction of the ‘water bridge’?

When we reached the south exit of the Almondell Country Park, I had to apply an algorithm to decide at which of three cafes we should stop at teatime, as follows:

The algorithm sent us to Calderwood Café, where we sat outside at tables or on a lengthy wooden log, in beautiful sunshine. 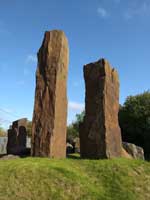 We paused again just beyond Kirknewton, where the road is bordered for a couple of hundred yards, by a modern artwork composed of standing stones.

I stayed with the group until we were safely on the Water of Leith Walkway at Currie, then headed back directly to Linlithgow.

Owing to COVID-19, almost all of my previous rides in 2020 had been solo, so it was great to cycle with other folk. A special Thank You to Tiana for so promptly forwarding the Emails which I had to send to her by First Class Mail! 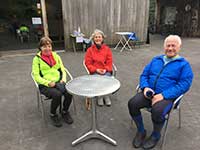 On a lovely sunny day Vic, Jenny and I set off through Inverleith Park, on now thankfully quieter bike paths, and met up with Alastair at Cramond Brig. (he had cycled from Linlithgow)

After a pause to chat and contemplate the scene below, we continued to Ratho, via Boathouse Bridge where we watched lots of planes landing and taking off! Sadly, we bypassed Craigie Farm due to Covid restrictions.
Then the quiet path from Kirkliston to Newbridge and over the hill to Ratho.
We enjoyed a Canalside picnic, while discussing the world as we saw it!

We said Goodbye to Alastair and had a smooth leisurely pedal along the towpath to the Water of Leith Centre, for an outdoor quiet cuppa.

Thanks to the "Gang of 4" for good company. A nice change to all my solo rides!